Emerging technologies :What to watch 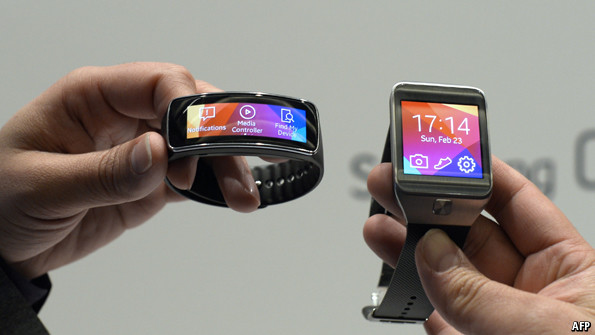 PICKING out the new technologies that will have a big impact on society is notoriously tricky. Sometimes inventions that do not seem to be important end up nearly everywhere. This was the case with the laser, for example. When the first lasers appeared in 1960 they were described as a solution looking for a problem. But lasers have been used to make machines from DVD players to barcode scanners, printers and telecommunications gear. And they are now regularly used in surgery and in factories to cut and weld materials. But trying to pick winners is compulsive and, as with the World Economic Forum’s recently published list of top ten emerging technologies for 2014, it can at least highlight some promising research trends.
What the Forum calls “body-adaptable wearable electronics” already comprise an explosive sector. Every electronics show is now awash with wearable gadgets, such as Google Glass spectacles with built-in video, and smart watches like those from Samsung Galaxy Gear that connect with wearers’ smartphones (as seen above). These devices, says the Forum, will become less intrusive, particularly in the way they monitor health and fitness. Indeed, some companies are starting to use conductive fibres to weave electronics into clothing (see this week’s Technology Quarterly).

Several of the other picks, however, are less well known but may nevertheless bring profound changes. One is finding a way efficiently to store electricity on the grid. At present, grid managers try to match the demand for power with generating capacity. This is not too difficult with fossil-fuelled power stations using coal and gas as they can be quickly fired up when needed. But with more energy coming from renewable sources, matching supply and demand will become difficult because the wind does not always blow and the sun shines-provided there are no clouds-for only part of the day. Finding a cheap, efficient way to store renewable electricity will be necessary to keep the lights on.

“There are signs that a range of new technologies is getting closer to cracking this challenge,” says the Forum. One it points to are flow batteries, capable of storing large amounts of energy in liquids. But there are other contenders, from various solid batteries to giant flywheels, storing compressed air underground and super-efficient heat pumps. But this is a technological race that is some way from being won.

Desalination, which the Forum picked as a top technology in 2013, remains a critical process to meet the growing demand for fresh water. But the brine left over from desalination processes is hard to dispose of and can damage marine life if pumped back into the sea. New processes are being developed which could extract valuable materials like lithium, magnesium, uranium and other more common, but still useful, elements from desalination brine. This would make desalination processes more cost-effective and less damaging to the environment.

The use of nanostructured carbon composites, another in the Forum’s top ten, is a technology already making its mark in manufacturing and one that has long been used in aerospace. Being stronger and lighter than steel, carbon composites can also be used to greatly reduce the weight of cars, and thus lower their fuel consumption (or increase range on a single charge if electrically powered). Carbon-fibre bodies also improve passenger safety.

We use cookies to ensure that we give you the best experience on our website. If you continue to use this site we will assume that you are happy with it.OkNo